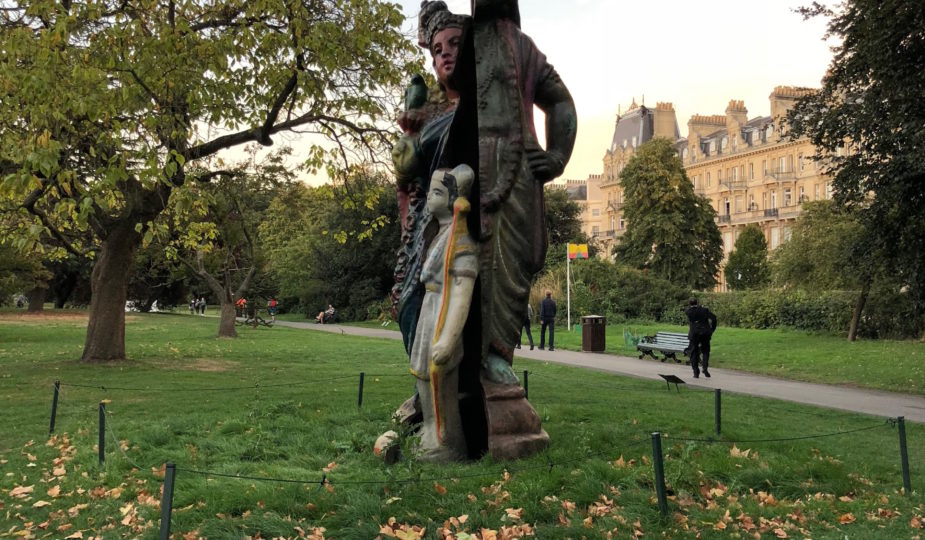 Outdoor art is my favourite kind of art, as strolling through a park on a nice sunny evening whilst pondering some art is as good as it gets.  As part of Frieze London, an outdoor exhibition is on display in Regent’s Park showcasing twenty five works from contemporary artists around the world.

Gunn-Salie’s work ‘Senzenina’ particularly struck a chord with me.  It is striking and abrupt, showing several life-sized headless figures that appear quite ghostly, cowered in displays of surrender.  It was modelled from actual police footage of the Marikana massacre at the precise moment before South African authorities opened fire on striking mineworkers who were demanding a living wage in 2012.  The sculpture also acts as a memorialisation of these men.  Their missing hands and heads are symbolic of loss, made even more moving by the fact they are life-size, and thereby encourage interaction with them in a human way.  The sculptures being set in a public space, outside and accessible to us, aids our interaction with them and helps change our interpretation of the sculpture, making it speak politically as the artist desired.

What makes the exhibition extra enjoyable is their use of technology.  They’ve used QR codes so that guests can get extra information on each work, as well as an App with an audio tour. It’s a small, but well crafted exhibition, definitely one to see before summer is over.